A Google research paper named Generative Models are Unsupervised Predictors of Page Quality paints a negative connotation of SEO practices. It has a section named “attempts at search engine optimization (SEO)” which says, “documents that attempt to perform SEO tend to be flagged as very low quality.”

The section goes on to read, “This is intuitive since these texts tend to simply string a series of keywords together and are therefore incoherent. Furthermore, we found a moderate number of product pages and professional profiles that also attempt to perform some form of SEO. We observed that media-centric domains, such as image hosting domains, often contain incomprehensible embedded text, possibly for SEO.” 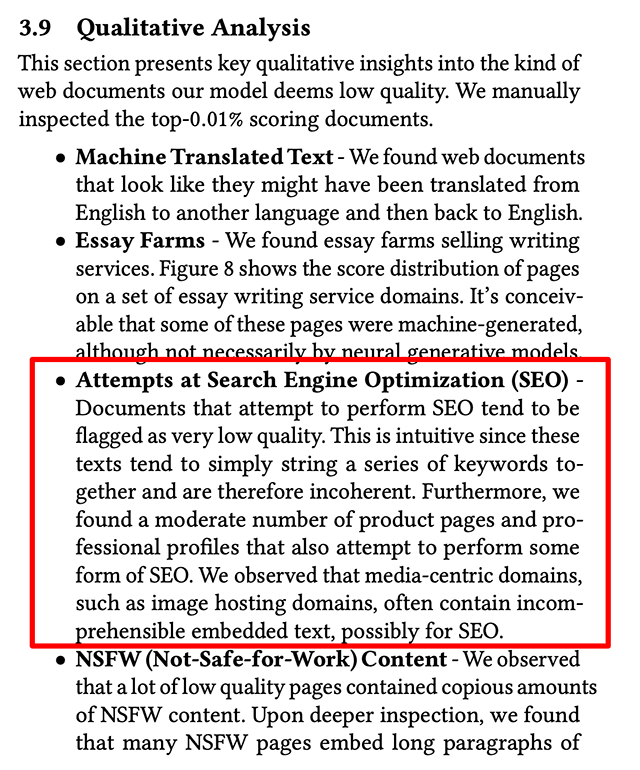 Pedro Dias, former Google spam fighter, now SEO, noted this on Mastodon and said, “This is an unfortunate wording from Google on their research “Generative Models are Unsupervised Predictors of Page Quality” whitepaper. It clearly casts SEO widely as spam and a contributor to “low quality”.”

Pedro isn’t wrong, but John Mueller of Google tried to downplay it by saying, “I think one of the challenges is that “good SEO” is essentially invisible: it’s a well-structured site, it has good content, people like it — those are not attributes associated with SEO by the bigger web.” “I feel it’s a losing battle to frame it as “not all SEO is bad”,” he later added. Keep in mind, Googler’s like John Mueller and others have said SEO is important and something Google values but then you have this research paper…

It is sad to see this wording in a Google research paper but we do know how much of a black eye the SEO industry has in the outside world. If you don’t know, just ask a layperson about SEO and see what they say. You would hope someone who works at Google on search would not shared those views but Google is a big company.

In any event, it might make sense to read through the research paper knowing that just because there is a patent document or research paper it doesn’t mean Google uses it. But this one, very well might be aligned to the helpful content update.

Apple could introduce a pricier iPhone ‘Ultra’ in 2024